Its habitat include regions in Columbia and Ecuador.

According to the IUCN Red List it is Endangered due to an extremely small known population of mature individuals. However intensive conservation actions seem to have stabilised the current population and resulted in a population increase. 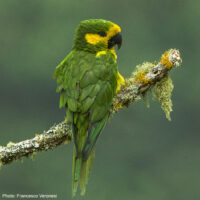