The Conuropsis genus include a single extinct species: Carolina Parakeet, which was endemic to the eastern USA. It belonged to the group commonly known in aviculture as Conures – a term that includes several genera.

The nominate subspecies C. c. carolinensis was native from Florida to Virginia and the C. c. ludovicianus subspecies was native through the Mississippi-Missouri drainage.

According to IUCN Red List both subspecies were common in the beginning of the 19th century but deforestation and hunting caused the population to rapidly decline. The last bird was observed in 1904 in Florida and in 1918 the last captive bird died in the Cincinnati Zoo. 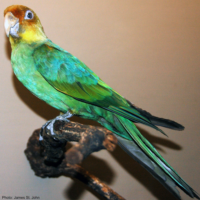