The Blue-crowned Parakeet was until 2013 included in the Aratinga genus but recent DNA studies resulted in a split.

The five subspecies are native to Bolivia, Brazil, Argentina, Uruguay, Columbia and Venezuela.

It is a medium size parrot with an overall green plumage; the greater wing coverts are green and the tail is green with red in the inner webs.

Most subspecies have a white eye-ring except the T.a. neumanni, which has an orange eye-ring. 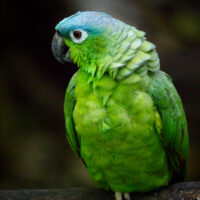