The Golden-plumed Parakeet is predominantly green with an orange frontal band over the beak and a yellow streak below the eye. It is about 35 cm long.

Its habitat includes regions in Columbia, Ecuador and Peru.

According to the IUCN Red List they are Vulnerable due to forest clearance, fragmentation and degradation. 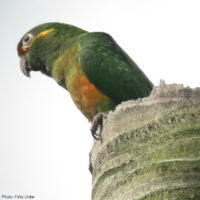