The monotypic Guaruba genus include a single species: Golden Parakeet. It is endemic to Brazil.

It is a medium sized parrot with an overall golden-yellow plumage and green flight feathers.

It was previously listed by the IUCN Red List as Endangered but was downgraded to Vulnerable in 2013 as the  population seems to be larger than previously estimated. 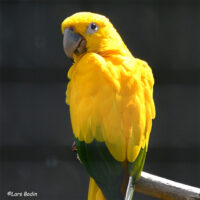