A common signature is primarily green body plumage with an olive or brownish patch on the chest and a head with different colours. The head has different colours than the rest of the body making it stand out. The tail is relatively short.

Formerly these species were included in the Pionopsitta genus but recent studies have concluded they should be moved to their own genus:  Pyrilia. 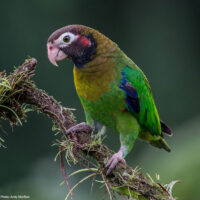