The monotypic Purpureicephalus genus includes a single species: Red-capped Parrot. It is endemic to Australia and is found in the lowlands of the extreme south-western Australia.

It is a medium sized parrot with a length of 34-38 cm and a long broad tail similar to the Rosella parakeets (Platycercus).

It was first described by the German naturalist Heinrich Kuhl in 1820 and the species was named Platycercus pileatus in 1830.  In 1854 it was reclassified as Purpureicephalus spurius by the French biologist and ornithologist Charles Lucien Bonaparte.

It is uncommon in aviculture. 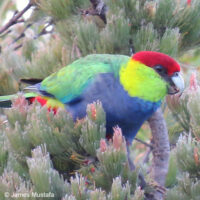