According to some sources, the subspecies P. c. abotti is considered a distinctive species but I adhere to the terms defined by [IOC].

Previously Pesquet’s Parrot was also included in the Psittinus genus but it was moved to Psittrichas.

The Simeulue Parrot was previously considered to be a subspecies of Psittinus cyanurus but was split into a separate species with the IOC 11.2 update in 2021. 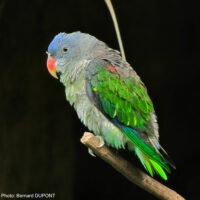