Previously Pionopsitta included several other species but recent mitochondrial DNA analysis resulted in the other species being moved to the Pyrilia genus.

Pileated Parrot is a medium sized parrot (about 22 cm) with an overall green plumage, and bluish primaries; the male has a bright red forehead, crown and lores – the female has green crown and lores and a green forehead tinted with blue. It is native to south-eastern Brazil, eastern Paraguay and north-eastern Argentina. 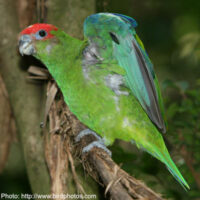