Some taxonomic authorities considers the smaller Cliff Parakeet to be a subspecies of the Monk Parakeet but according to IOC these two species are distinct.

Most parrots build their nest in hollow trees but the Monk Parakeet builds their nests among branches. The bulky nest is made of sticks and not only used for breeding but also for sleeping at night. Despite their small size a colony of Monk Parakeets can get very noisy. 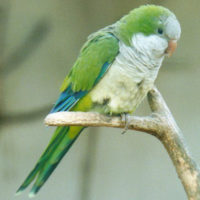