The Micropsitta genus includes 6 species and several subspecies of pygmy parrots endemic to New Guinea and nearby islands, where they live in forrests.

With a size of about 8-10 cm the pygmy parrots are the smallest of all parrot species.

Besides insects a major part of their diet includes certain fungi and lichens native to their local habitat; as such it is very difficult to breed pygmy parrots in captivity.

The population of most species are stable but the Geelvink Pygmy-parrot is in decline and listed as Near Threatened by IUCN Red List. 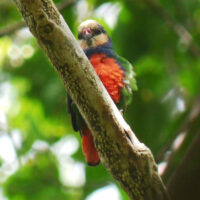