According to IOC the monotypic Mascarinus genus include a single extinct species: The Mascarene Parrot. However, there have been some dispute about this genus:

In 2011 a genetic study by Samit Kundu et al. concluded that the Mascarene Parrot was related to the Lesser Vasa-Parrot. Based on this study it was suggested that the species in the Coracopsis genus should be moved to the Mascarinus genus. For this reason some sources – e.g. [Clements] – currently include the Lesser Vasa-parrot, Greater Vasa-parrot and the Seychelles Parrot in the Mascarinus genus.

However, there were some dispute about these results and it was suggested that the DNA sample used in the study might have been damaged or contaminated with DNA from other birds, and more studies were required before a conclusion could be made. In 2017 a new genetic study by Lars Podsiadlowski and colleagues came to a different conclusions and suggested that the Mascarinus genus together with Tanygnathus should be merged into the Psittacula genus. 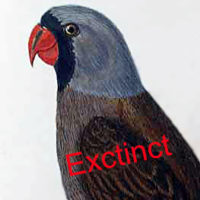