The monotypic Lophopsittacus genus includes the extinct species Broad-billed Parrot, also known as Mauritius Parrot as it was endemic to Mauritius.

Very little is known about this species as it became extinct in 1693. They were poor fliers, which made them an easy prey for hunters.

The beak was large and suggest they have been feeding on large nuts. The head was large compared to the body and had a distinct crest on the front. 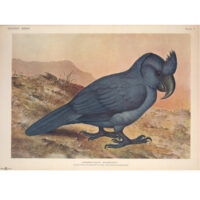