The Deroptyus genus include a single species: Red-fan Parrot. It is native to the Amazonia; the breeding range includes Columbia, Peru, Brazil and the Guianas.

The Red-fan Parrot has some unusual elongated neck feathers that can be raised when they are exited; when raised the feathers form a red fan with blue bars, which make the bird seem much larger.

They are very territorial and usually travel alone, in a pair or in small groups. In aviculture they are known to show aggression not only towards other species but also towards their mate!

They are uncommon in aviculture but can be affectionate pets, that can learn to mimic a few phrases. 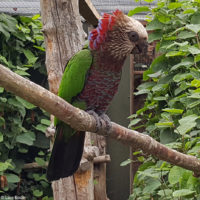