The Strigops genus include a single species – the Kakapo – whick is endemic to New Zealand. It is nocturnal and has an owl-like facial disk, which is why it is also known as Owl Parrot.

With a size of 58-64 cm and a weight of up to 4 kg the Kakapo is the heaviest parrot species. It is the only parrot species that can not fly but live on the ground, which make it vulnerable to predators like cats.

It is on the verge of extinction and is listed as Critically Endangered by the IUCN Red List; they are listed on CITES Appendix I. Before human colonisation they were found throughout most of North, South and Stewart Islands. With human colonisation, cats and rats were also introduced, which have caused a major decline in population; in 1999 only 50 individuals in breeding age survived! Now it is likely extinct in its native habitat.

The few surviving individuals have been relocated to Codfish Island (Whenua Hou), Anchor Island, and Little Barrier Island (Hauturu-o-Toi), where invasive species like cats, rats, possums and stoats have been eradicated and the Kakapos are closely monitored. Fortunately the population is now slowly increasing; in 2016 the population has increased to 157 individuals. 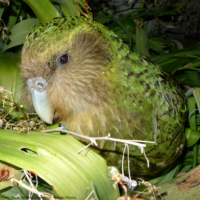