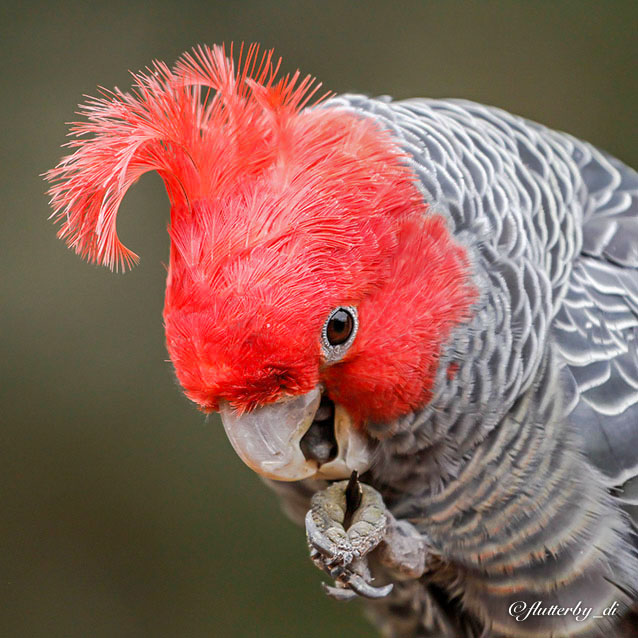 Photo: All photos and video on this page are copyright © Di Donovan
See more of her photos on Instagram: @flutterby_di.

Gang-gang Cockatoo – Callocephalon fimbriatum (Grant, J, 1803) – is a small, sturdy parrot with large wide wings and short tail. They have a characteristic top, which is more puffy than the other cockatoes.

They are sociable birds and relatively quiet – especially when compared to the Sulphur-crested Cockatoos that can be very noisy.

Gang-gang Cockatoo can be easily recognized by its characteristic creaking calls, which sounds like a creaking door that opens. When eating they make a soft growling sound.

They are not very common as pets or in aviculture. With good care they can have a lifespan of 60 years or more.

The plumage is predominantly slate grey with lighter grey edge. The underside has a yellow and pink edge. The beak is light grey. The eyes are dark.

The male has a red head and crest.

The female has a small fluffy pale grey crest, grey head and red stripes on her chest. The light grey edges on the grey feathers are more pronounced than on the male.

The young birds look like the adult female – young males gradually get their red head and crest.

It is widespread in eastern New South Wales from the central slopes and highlands to the southern coast and down through Victoria’s northeastern areas to Seymour. They are also found in eastern Melbourne, Mornington Peninsula and southwestern Gippsland. In addition, there is a group in the western part of Victoria from the Otway region to South Australian.

It was previously widespread in south-eastern Australia but there has been a drastic fall in their numbers due to urban development in Sydney as well as competition with other species about holes in the trees for nesting. In Sydney a large colony was previously present but now only one a single male has been spottet. There are still birds in the Blue Mountains outside of Sydney.

Previously also located on King Island until the mid-1960s but is now extinct there.

The birds are nomadic:

For nesting they prefer tall trees where the female either chooses an existing cavity or utilizes her powerful beak to make a cavity in a tree. The male helps building the nest using small pieces of wood.

Wild birds feed on seeds from trees and shrubs, as well as berries, fruits, nuts, insects and larvae. The diet include sunflower seeds; walnuts, peanuts, pine nuts and fresh corn; apple and other fruits; hawthorn, cotoneaster and Pyracantha (firethorn) berries.

They spend most of their time in tall trees where the food is both gathered and consumed – they only come down to the ground to drink or seek food from fallen fruit or pine cones. 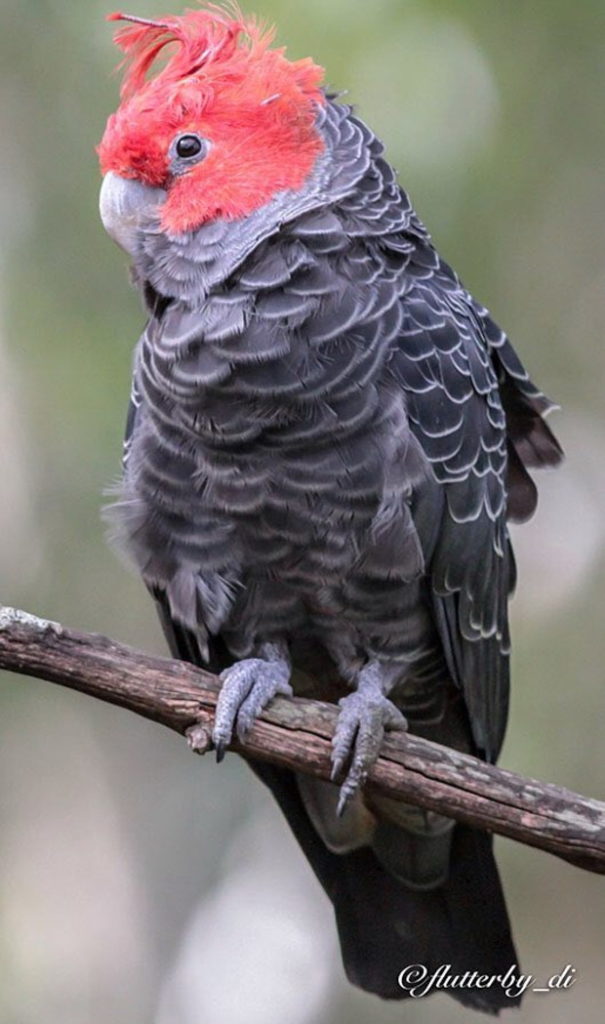 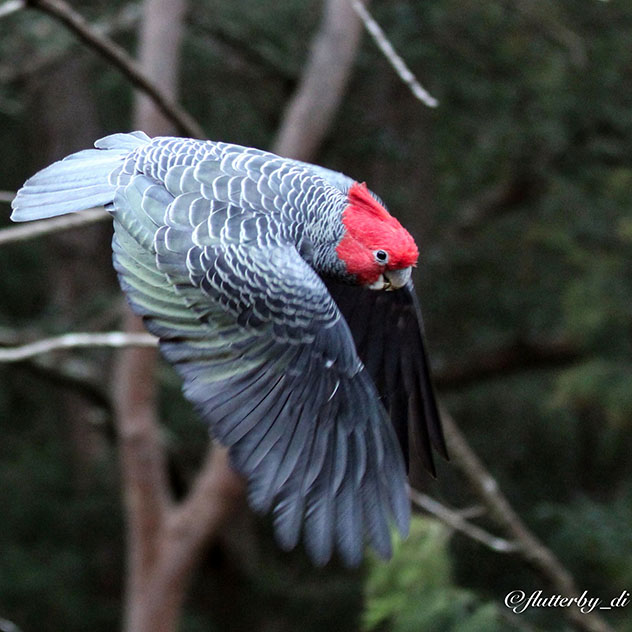 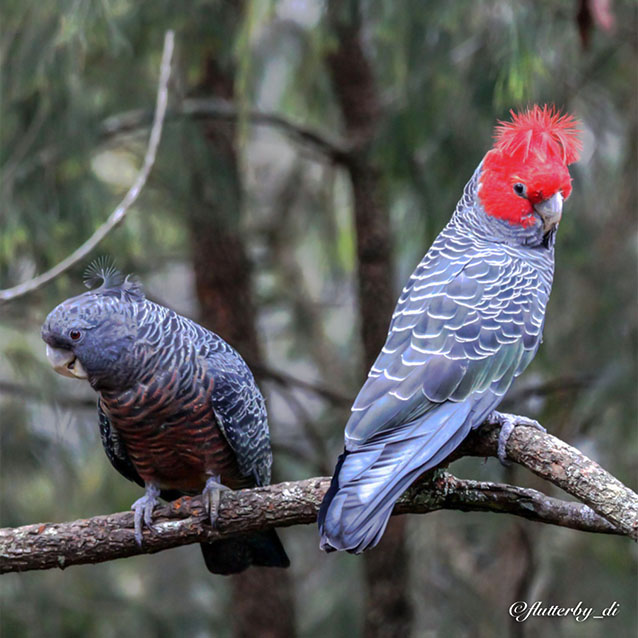 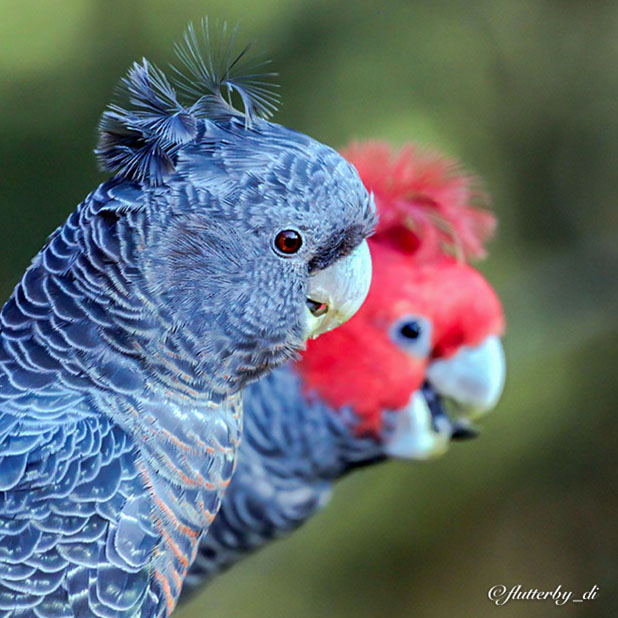 Gang-gang Cockatoo ties a close monogamous band with the mate and forms a pair for life.

They have a strong beak and love to chew so take that into account when choosing a cage or aviary. Give them plenty of bird safe wood or other toys which they can chew on.

They also love getting a bath.

As a chest box, a 1m long hollow tree trunk can be used.

The clutch usually contains 2-3 eggs. Both the male and female incubates the eggs for  25-30 days – the chicks fledges after 8 weeks. The male helps feeding the chicks after they are hatched and both parents still feed the chicks 4-6 weeks after leaving the nest.

All photos and video on this page are copyright © Di Donovan  – see more of her photos on Instagram: @flutterby_di. 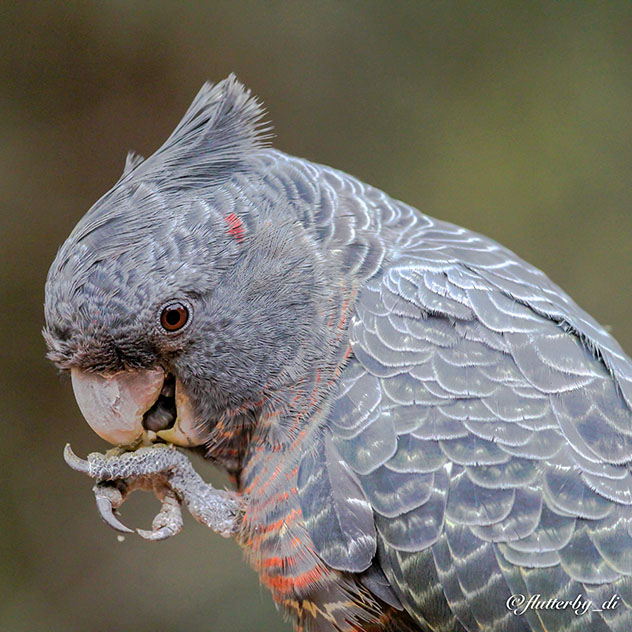 Notice the grey head and crest on the female Gang-Gang 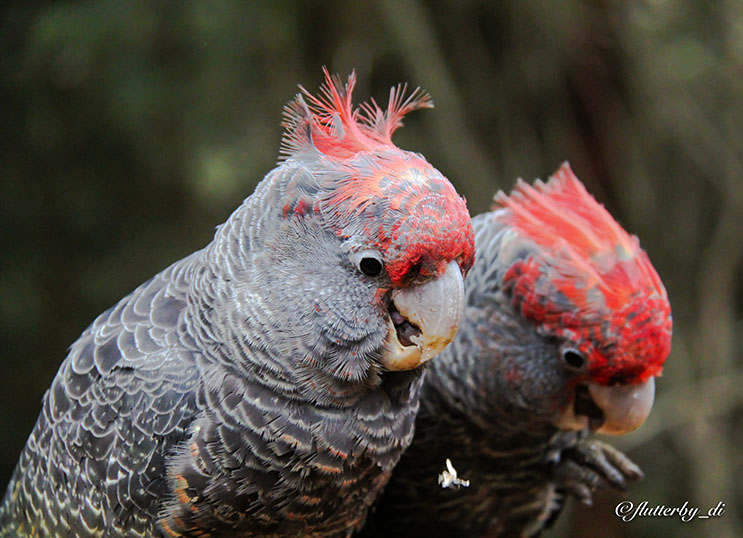 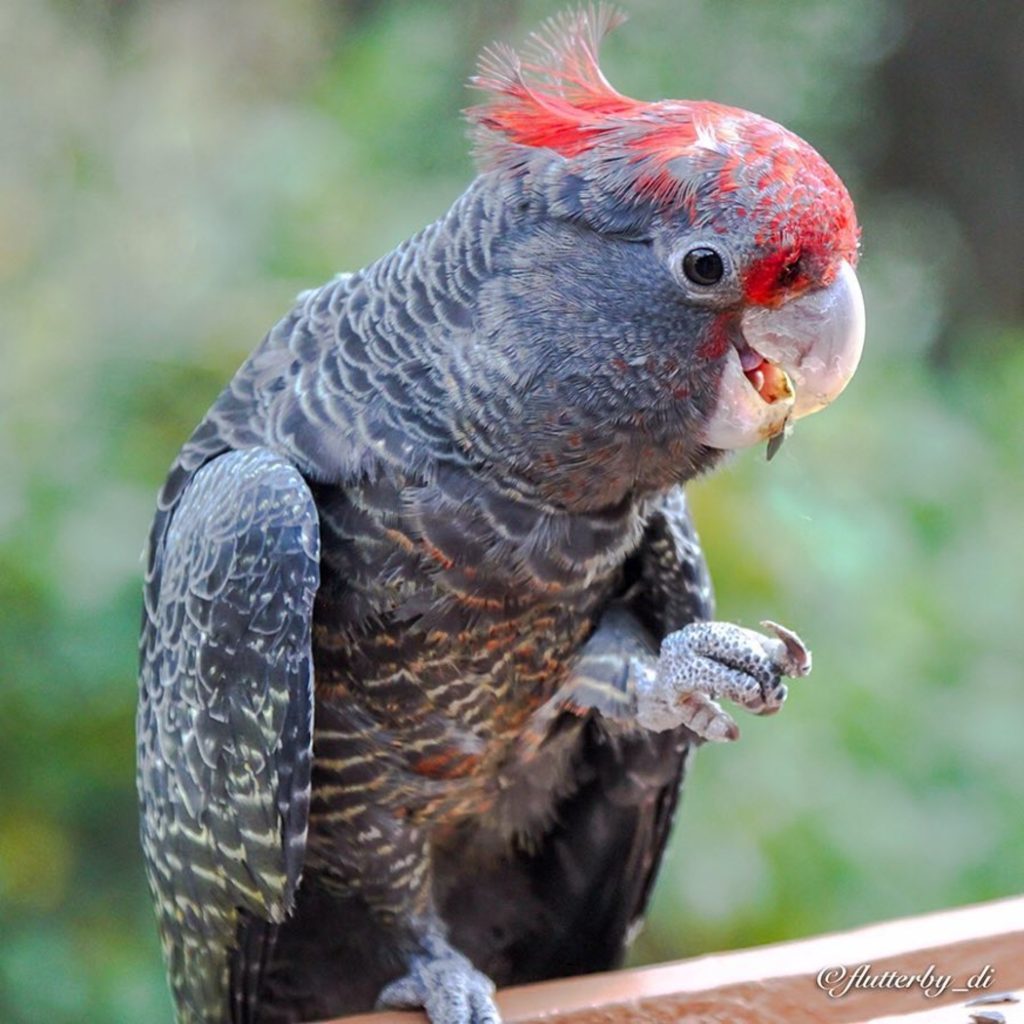