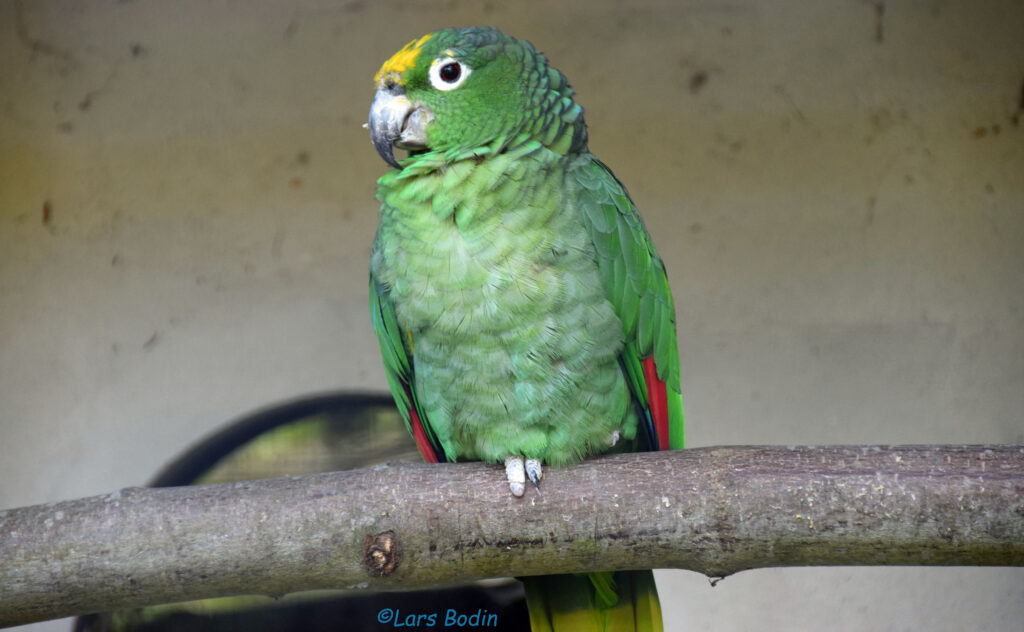 The Southern Mealy Amazon – Amazona farinosa (Boddaert, 1783) – is somewhat rare in captivity but is known to be very calm and gentles as a pet. It is one of the largest parrots in the Amazona genus.

They can be seen in pairs or in small flocks with up to 20 individuals if there are plenty of food nearby. They gather in tall trees for communal roosts outside the breeding season; sometimes with several hundred birds gathered. They feed quietly in the forest canopy but can be very noisy at dusk and dawn.

According to IUCN Red List the Southern Mealy Amazon is Near Threatened due to deforestation, wildlife trade and hunting. It is included on CITES Appendix II and EU Annex B.

Green body with yellow patch on crown (size may vary) and blue/black wash on back of neck. The green feathers on the head and back of neck is dull green with black tip resulting in scaly pattern. Red carpal edge. The tail is green with a yellow/green stripe at the end. Red eye with white eye ring. The beak is horn color.

Some sources mentions the subspecies A. f. farinosa , A. f. chapmani and A. f. inornata but these are not recognized by IOC

The Southern Mealy Amazon is endemic to the tropical Cental and South America: Its natural habitat ranges from eastern Panama and Colombia to north-eastern Bolivia, eastern Brazil and the Guianas.

It resides in dense lowland rainforest but also near clearings and forest edges. Also seen visiting plantations with tall trees.

Wild birds feed on various figs, pods and arils. They may also feed on maize.

The clutch usually contains 3 eggs, that are incubated for 24-27 days. The chicks reach fledging age 9-10 weeks after hatching.